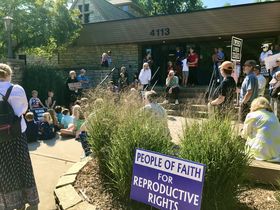 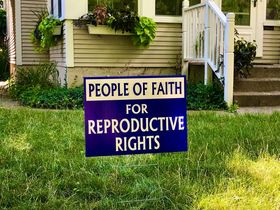 ECLC Reproductive Rights Congregational Statement drawn from the ELCA Social Statement on Abortion, 1991, and from the Pastoral Message on Abortion from Presiding Bishop Elizabeth Eaton, May 17, 2022.

• Abortion is legal, regulated, and accessible to all

• Reproductive health care, including contraception, is legal and accessible to all

It is our conviction that any person who is pregnant has moral agency and authority to discern what to do. We also recognize that while the choice is personal, decision-making often happens in community — with God, family, partners, friends, health care providers, and pastors. We respect and support each person’s path to discernment.

We must continue to be bold in our prayers and in our public witness for a more just society that cherishes and guarantees the dignity of all. "May the God of hope fill you with all joy and peace in believing, so that you may abound in hope by the power of the Holy
Spirit" (Romans 15:13).

Many Minnesota churches have long been part of the anti-abortion movement, but local religious perspectives on abortion are diverse and often nuanced.

Stuck in the flowerbed in front of Edina Community Lutheran Church is a lawn sign that reads: "People of faith for reproductive rights."

More than a dozen church members came up with the idea after the leak of the Dobbs v. Jackson Women's Health Organization opinion that overturned the 1973 Roe v. Wade ruling guaranteeing the right to an abortion.

"They felt it was important to tell the story that there are people of faith who, while they wish that we would have fewer abortions in our country, they think that legislating and criminalizing abortion in nearly all circumstances is not the way to achieve that," said Jeff Sartain, a co-pastor at the church.

Many Minnesota churches have long been part of the anti-abortion movement, but local religious perspectives on abortion are diverse and often nuanced.

In the months since the Supreme Court overturned Roe v. Wade, however, a number of Twin Cities faith communities have begun publicly supporting abortion rights, some in new and very visible ways — from lawn signs to bumper stickers reading, "Abortion bans are against my religion."

According to the Pew Research Center, at least eight major religious groups — including the Presbyterian Church (U.S.A.), Unitarian Universalists, United Church of Christ, both Conservative and Reform Judaism and the Evangelical Lutheran Church in America — officially support abortion rights, although some do so with restrictions. Other faiths don't have a public position on the issue, while groups such as Catholics for Choice break from their church's official anti-abortion positions.

"I think because of the conflation of the anti-abortion movement with Christian messaging, folks just assume that if you're a religious person, you're anti-choice, and that's never been true. And it's definitely not true now," said Rev. Katey Zeh, an ordained Baptist minister and the CEO of the Washington, D.C.-based Religious Coalition for Reproductive Choice.

Zeh's group began in the 1960s as an underground network of ministers and rabbis that referred women to abortion providers and later evolved into an interfaith advocacy coalition.

Interfaith advocacy seems to be the model for more recent groups and gatherings. This month, more than three dozen women faith leaders held a reproductive rights fundraiser in St. Paul. And in January, the Texas-based Spiritual Alliance of Communities for Reproductive Dignity held a virtual summit for more than 300 faith leaders and recently rolled out a curriculum for congregations.

The alliance offers discussion guides and teaching materials stating that "prayerful decisions to have children, to not have children, or to end a pregnancy can be equally moral."

When abortion rights protesters gave out a collective scream outside the Federal Courthouse in Minneapolis this spring, they were led by Rev. Kelli Clement from the First Unitarian Society of Minneapolis.

Most church leaders aren't as vocal as Clement, but she said she's seen an increase in the churches that want to address reproductive rights.

"What I've seen now is congregations asking, 'How can we talk about this in nonpolarizing ways? How can we engage with this?'" she said.

It was in a 2008 sermon that Clement first publicly talked about her own abortion and began forging a pastoral path to join a movement called "reproductive justice."

An intern at White Bear Unitarian Universalist Church at the time, Clement told her story (she was in her 20s, struggling with alcoholism, not ready to be a mother) as part of a message called "choice makes us human."

She had trusted that her supervising minister and the congregation would be supportive — and they were.

Bans are 'against my religion'

As Rosh Hashanah approached this month, sophomore Gabe Karsh, a member of the Macalester Jewish Organization, helped set up a table in front of the St. Paul college's student center and picked up a shofar.

He gave an attention-getting blast from the ram's horn (traditionally blown during the Jewish New Year to awaken the complacent), which drew a steady stream of students who picked up free magnets reading, "Abortion bans are against my religion." The students talked with Karsh, Rabbi Emma Kippley-Ogman, the school's associate chaplain for Jewish life, and Erica Solomon, executive director of the Minnesota chapter of the National Council of Jewish Women.

Solomon's organization held "sho-tests" across the country in the weeks before the holiday, spotlighting abortion access as an important issue for Jews. While Jewish denominations interpret the question of abortion in different ways, rabbis such as Danya Ruttenberg, the council's scholar in residence, point to teachings and laws that depict a fetus as part of a pregnant person's body, not as a person with rights. They also say their religious values compel them to get involved.

"For us, it's just really important to be loud and proud about the fact that, for Jews and a lot of folks that identify with other religious backgrounds, you can absolutely live a religious life that is supportive of abortion rights," Solomon said.

"A huge part of our values is not just protecting rights for ourselves or our families, but it's pursuing justice and protecting rights and dignity for all of our neighbors," she said. "It is not in spite of our faith, but for us very much because of it that we're speaking out."

One Unitarian Universalist pastor came by to pick up a sign, but most of the others went to congregation members, not other places of worship. The church still has about 10 left.

"We found out that some didn't want to have a sign because they were afraid of violence or vandalism," Sartain said. "Others didn't have a unity of opinion in their congregation. And then some just weren't inclined to have lawn signs for other reasons."

In addition to the sign, the congregation crafted a careful statement that, as Sartain said, "clarified our stand as a community," posted it on the website and held a forum about it. It opposed "both the total lack of regulation of abortion as well as legislation that criminalizes abortion under most or all circumstances."

It also included this line: "It is our conviction that any person who is pregnant has moral agency and authority to discern what to do."